Sale on canvas prints! Use code ABCXYZ at checkout for a special discount!

The city is filled with pollution. Corporate logos and advertisements beneath a barcode sky—people walk the streets with skeleton faces. It is a time of great strife. This time of great strife is overcome by the civil rights movement. The civil rights movement leads to the tree of life, the tree of many faces, and unimaginable prosperity. It is a time of plenty leading to scientific advancement and achievement. The discovery of the atom bomb, the moon landing, Dolly and Polly (the sheep that were cloned), DNA, and the building blocks of life, lead us into the age of computers. With computerization people stop learning from books and each other, sitting in cubicles, staring at computer screens, isolated from the rest of the world. People become separated. This compartmentalization leads to alienation. Our children staring into television screens isolated even from themselves, watching themselves melt into the couch. This alienation leads to the carving of the world with roads, the destruction of nature, and Mother Nature reaching out for help.

This painting is a reminder that we are care takers of the earth. It is a warning that we must examine the excess and wealth we have gained. We must be brave like the people who marched us into prosperity, or we are in danger of destroying the world. We are in danger of reverting back to the burning city. Sublimnalities is a prophesy of our uncertain future. It shows us where we’ve been and where we’re going. It gives us the ability to put our everyday lives in perspective of the history that brought us here. If humanity is to succeed and survive, we must stop the waste, the pollution, the alienation, and realize that our computers and scientific achievements are only good if we use them as tools of progress, to bring people together with nature, and preserve our heritage by caring for our planet and each other.

Meteor Over the Indian Ocean 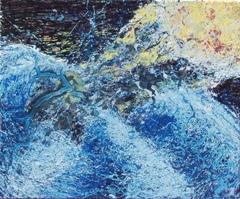 Meteor Over the Indian Ocean is one of my favorite paintings. It is one of the most successful pieces of Gravitational Art. The dark lines in the sky, the movement in the waves, the blending of the colors in the meteor and in its tail, and the large cracks between the water and the sky, make it an exemplary piece. 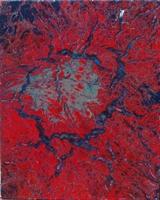 Techtonic Shift, and Meteor Over the Indian Ocean are both part of a story of global disasters. I have been watching the TV shows The Universe and Mega Disasters and it makes me look at the world from a different perspective. We are such small creatures when seen in relation to the vastness of the universe, and this planet we live on spinning around the sun is so susceptible to drastic change from a massive volcanic explosion or asteroid impact. Ultimately we have little control over the fate of our planet, so we must live our best possible lives every moment, because we never know how long we really have. So for me these paintings are not just beautiful because they look like natural phenomena, but they remind me to live in the moment taking nothing for granted. It is in this irony of a beautiful disaster that I find the meaning of life. The thought of a future death compels me to create because someday I will not be able to create anything.